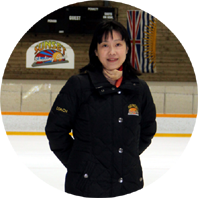 Honest, mutual trust with skaters and parents through good communication.
Strives to bring her skaters to the top of the world.

Coached in China for 9 years before moving to Vancouver in 2006.
Has been coaching in Vancouver since 2007.

Jennifer has had skaters passed all levels of tests from Pre-preliminary to Pre-Novice, Novice, Junior and Senior tests since she began coaching in Canada in March 2007.